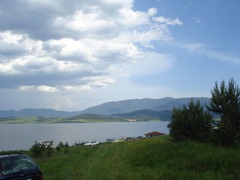 12 movies will promote Bulgaria as a tourism destination in the country and abroad. Movies that are included in the project This is Bulgaria have a duration of up to 27 minutes and they focus on different topic of Bulgarias history throughout the centuries. Along with history, culture and traditions, one of the movies, Luxury Bulgaria presents business conditions in Bulgaria, our resorts, opportunities for extreme sports and entertainment. Collection becomes also a fantastic one with 90-minute movie for Bulgaria which is some sort of an overview.

Video catalogue of Bulgaria will be distributed all over the world, so it will be translated in seven languages- Bulgarian, English, French, German, Spanish, Japanese and Russian. 2000 landmarks in Bulgaria will be presented. Also some photos are made from a helicopter and spectators will also enjoy underwater photos etc. The premier of the movie in Bulgaria will be in spring 2012 and it will introduced in Brussels on 24th May 2012 The budget amounts to 1 million BGN, but the full realization of the project requires another 200 000 BGN. It is planned that there will be a version for kids and it will be distributed to schools primarily due to educational purposes.