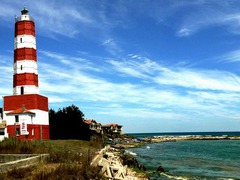 The small Bulgarian Black Sea resort of Shabla which is popular due to its picturesque sceneries and pristine beaches has been visited for the first time by Chinese and Canadian tourists in 2011. "The visits of Chinese and Canadian tourists are something quite different for us," Zhechev told Radio Focus  Varna. He revealed data about the number of tourists in Shabla, Bulgaria's northernmost Black Sea municipality which still boasts a coastline with virgin nature. This is what makes Shabla different from the rest of Bulgaria's coastal resorts where natural habitats were destroyed by massive resort construction.

A total of 5 707 tourists visited Shabla in summer season 2011 and year only 874 were foreigners since the small beach resort is not so promoted. The traditional foreign visitors of the Shabla Municipality, which is home to some unique bird species within the Shabla and Durankulak Lakes, come from Romania, Poland, Germany, UK and Ukraine. The Shabla Municipality has received BGN 10 000 from hotel owners in the form of tourist tax from some 20 000 night stays over the summer, Zhechev said. He pointed out that over the winter Shable attracts a certain number of foreign visitors on birdwatching tours as migrating birds make their winter home near the large lakes off the Black Sea coast. Zhechev outlined the ambitions of the Shabla Municipality to boost eco tourism next year with a number of projects.