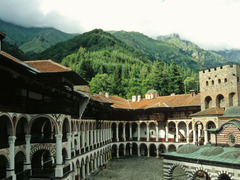 The monastery is one of the most important cultural monuments in Bulgaria, the symbol of Bulgaria on the list of UNESCO World Heritage Site.

Rilets Resort & SPA 4* is a luxury hotel located in the Rila Monastery Nature Park, which opens its doors in 2017. It is the only 4-star complex in this natural park and offers modern, fresh and comfortable design, individual service and hospitality . Each of the 76 rooms and suites are furnished with modern furniture to make guests feel at home. The hotel is located approx. 500 meters from the Rila Monastery itself, and activities such as horseback riding, fishing and cycling can be practiced in the surrounding area. Cars and bicycles can be rented on site. Rilets Resort & SPA 4* features a restaurant and bar, barbecue facilities and a children's playground. Free WiFi is available throughout the hotel, and free private parking is available. Reception is open 24 hours a day.

All hotels in Rila Monastery - find a hotel on the map

The Rila monastery was founded by John of Rila in the 10th century, as a colony for hermits. Later it became one of early mediaeval culture. It declined during the 11th century, but with the foundation of the Second Bulgarian State great care was taken of it. The vicissitudes of time forced its location to be changed on several occasions. It has been destroyed by fire, and abandoned by the monks.

Its present day place, 119km south of Sofia, is the one in which it stood during the 14th century, when protosebast Dragolov Hrelyo settled in the monastery as an independent ruler. In 1335 he built the five - storey defence toward, topped by the Transfiguration Chapel, fragments of whose murals can still be seen today. The large monastery kitchens are located in the northern wing and are a unique example of building and architecture: 24-metre cone passing through all floors by means of ten rows of arches topped by a small cupola.

The Holy Virgin main church was built from 1834 to 1837 in the place of the old burned down church. It is a combination of the old three-nave basilicas with the cruciform churches of Mt. Athos and the Italian cupola churches. The interior is extremely impressive. The murals were painted between 1840 and 1848 by some of the finest artists of the time.

Thirty - six figural scenes, the figures of the Old Testament Kings, apostles martyrs, an exceptionally rich ornamentation of flowers - this in short, is the subject matter of the main carved altar of the Holy Virgin Church fashioned by four masters over a period of five years.

Find out more about Rila Monastery at BulgariaMonasteries.Com

Rila monastery on the map of Sofia