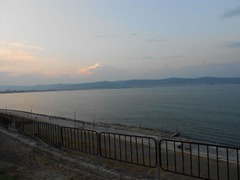 I have decided to choose Nessebar coastal resort, Bulgaria for the present insiders guide, because it is located near the party venue Sunny Beach. The latter was the place where I spent a wonderful night at the concert of DJ Tiesto on 31st of July 2011. I visited Nessebar a couple of years ago and this splendid seaside resort allured me due to its magnetism, specific charm of the old town, the mystery, history, intertwined with the melody of the sea waves.

Today I will present you my travel notes for Nessebar, one of the oldest settlements in Europe and a beloved Bulgarias Black Sea resort. Nessebar is located 37km northeast of Bourgas city and it lies in the northern part of Black Sea coast. Nessebar is situated near Pomorie, a family-friendly coastal resort which is famous for its curative mud, and the golden pearl of entertainment, Sunny Beach. Nessebar resort is encircled by the crystal clear Black Sea which attracts thousands of tourists every year. It is considered that Nessebar is one of the oldest cities in Europe, the place, where Thracians and Greeks left their inheritance for the mankind. Nessebar is captiving with the spacious coasts, crystal clear water, silky sands, first class hotels like Festa Nessebar. The beautiful seaside resort combines the charm of the modern present day and the secret of the past, the serenity of amazing spots by the sea and the noise of the endless party. 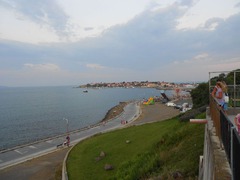 The impressive architecture of the old town and historic monuments, depicting the upsurges and falls of various epochs, are the reason why Nessebar is number 6 of top 100 tourist places in Bulgaria. I decided to choose an accommodation in New Nessebar which features the appearance of a modern coastal resort. If you go to the promenade in the new part of Nessebar, though, it seems that the nuances of the horizon are in different colours, specific, absorbing and sumptuous...As I arrived in the evening, it was not possible to go to the beach, but I managed to feast my eyes on the azure sea which obviously tried to reach the beautiful starlight kingdom. It seems that the sea wished to feel the rhythm of the resort, the lifestyle and atmosphere in all coastal resorts. As it comes to me, I think that the sea manages to revive my powers, makes me think over the important issues of this life and washes all my daily worries away, because an issue is only a particle of the infinity.

The beach, sea, graceful waves, multicoloured domes of heaven and those romantic houses in the old town Nessebar made me feel that I am still alive and those natural beauties will continue telling their wonderful stories even after thousands of years... Lets enjoy together the great holiday atmosphere of Nessebar and its surroundings today in order to start to believe in a better tomorrow. 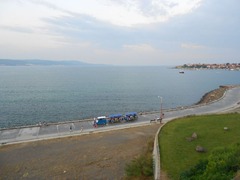 After I admired the seascapes for a while and contemplated about the lands beyond the sea, I made some photos of new Nessebar, managed to capture the small tour train and finally I made my way to the old Nessebar. On my way to this amazing part of Nessebar, I saw the travelling funfair of Nessebar, full of kids, 3D entertainment, bumping cars and other entertainment options that a child would not miss. Honestly speaking, I was pleasantly surprised by the well maintained gardens, full of colours and definitely Nessebar is a clean resort where you will not see garbage and dirty alleys. Although it was about 10pm, the streets were full of holidaymakers who wished to discover Old Nessebar by night.

The infrastructure of Nessebar is rather interesting. The old part of Nessebar is located on a small peninsula, whereas the new one is jutted out into the sea. The isthmus that connects the old and new part is 400m long and it is a real pleasure to walk down the alley and reach the old Nessebar, a town with the greatest number of churches per person. 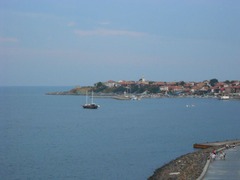 Old Nessebar is also known as Old town-a man of wisdom where past, present and future go together and somehow confuse the usual idea of the traveller. When Romans conquered Nessebar, it was named Messemvriya. As soon as it became a part of Bulgaria, Slavs decided to call it Nessebar. The modern Black Sea resort is proclaimed an architectural and archaeological reserve in 1956. This is the reason why thousands of travellers flock to Nessebar every summer. Yet, the resort is a real treasury of the spiritual heritage, a result of many centuries of existence and its the cultural and historic value which turns Nessebar into a settlement that deserves to be under the auspices of UNESCO.

In the middle of the isthmus which leads to the old Nessebar, I saw the symbol of Nessebar, the Old Mill that seemed to ignore the vanity of the modern world. Believe it or not, it looked like as if the Old Mill was talking to the sea. Nowadays the mill is not functioning, however, it is an impressive landmark, one of Nessebars symbols. Even some nights a bagpiper played typical Bulgarian songs by the mill and thus every visitor could hear traditional Bulgarian sounds and the echo of the past. Nessebar was a cross point of many civilizations and ancient cultures. The romantic harbour Nessebar also revealed the history. 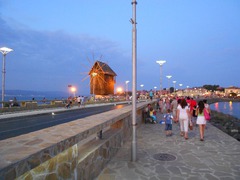 Soon after I passed by the old mill and the impressive statue on the other side of the street, I was welcomed by ancient ruins, illuminated by coloured lights and dressed in the dark mantle of the night. The real light show received an extra value by the song of the bagpipe which seemed to be a cross point of emotions, feelings and thoughts. As soon as I passed the ruins, I found the Archaeological museum on my right side. Unfortunately, I could not visit the museum, but this will be my first thing to do next year. I know that one of the most impressive artefacts, housed in the Archaeological museum, is the inscription-decree in honour of the Thracian leader Sadala. It dates back to the 3rd century BC and it gives information about the relations between the Greek polis and Thracian tribes. Here we will also find a silver coin treasure in which there are many Thracian replicas.

I adore walking down the lively cobblestone streets of the old part of Nessebar. The wooden houses, monuments of architecture and culture of Bulgarian Revival, impress tourists and its inevitable not to feast your eyes on the unique architectural details, precisely created ornaments and the creative approach of the craftsmen. Its interesting that some of the old Nessebar houses are art galleries. 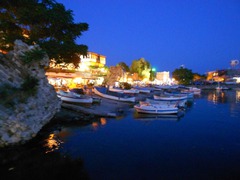 The unique charm of the old town is hidden in the old streets where you can meet talented artists, find handmade souvenirs, beautifully painted art pieces, spacious restaurants, couples in love, happy families, remnants of ancient churches and other buildings that keep the spirit of a modern present and a wonderful part. Here you can walk for hours, discover ancient remnants in the old town, open your eyes for the impressive art and approach of the talented Bulgarian craftsmen. Nessebar features many beautiful landmarks and my words may somehow provide you with a distorted picture of the resorts beauties, however, I will humbly reveal that most visited landmarks are the ancient fortress walls, medieval temples, old houses of Bulgarian Revival period, churches of different styles /42 from different centuries and epochs/. The curious traveller usually visits St.Virgin Mary, built in 6th century, St.Sophia from 4th century, Jesus Christ Pantokrator /13th century/ and St. John the Baptist /11th century/. It is considered that the temple St. John Aliturgetus (Unconsecrated) is the most beautiful church in Nessebar. Another interesting landmark that I was aware of, but I came across by chance, is the remnant of the Roman Baths in ancient Nessebar. Ruins are located in the lowest part of the northern coast of the resort, north of the church St.John. Unfortunately, only 2/3 of the baths are researched, the narthex, central hall and the premises of the pools. Perhaps the other part of the baths will remain a mystery forever. According to me, its interesting that there were mineral springs near Roman baths...Water means life and prolific lands.

On my way back to the new Nessebar, I was impressed with the fortress walls and towers, encompassing the old Nessebar. They used to guard the town against the attacks of nations that wished to conquer Nessebar. The fortification was enforced during the years and it was impossible for the enemy to invade the rich settlement. Fortress walls of Nessebar were excavated and partially restored in order to be turned into some of the most imposing monuments of a glorious history and a talented nation. 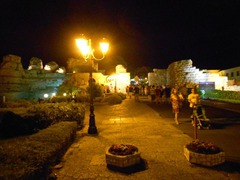 Presumably you are left speechless at the photos of Nessebar by night and you indulged in a different world...I am sure that you can feel the authenticity of Bulgarian traditions, the beauty of the seascapes and the peculiar charm of old Nessebar. I was impressed with restaurants in Nessebar, the delicious cuisine and excellent services. I liked the Mexican restaurant in the western part of the old town, because there you can taste delicious meals and admire at the night seascapes. Actually in the old town Nessebar I saw many taverns and restaurants that are located on the coast, so your visit there provides you with this specific atmosphere and tranquillity that I have also dreamt of.

New Nessebar is an attractive venue for all who love emotions and world of entertainment. Here you will find an amusement centre, billiards, bowling, darts, discos, taverns and bustling nightlife. There are regular buses between Nessebar and other coastal resorts: Ravda, Obzor, Sunny Beach and Varna. 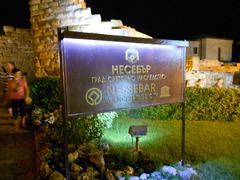 Even though I also like Sunny Beach due to the performances of Solar Summer Festival which is organized here in August, I prefer staying in Nessebar, because it is interesting, beautiful and its prime location helps you visit other coastal resorts. Sunny Beach is the place where you can have fun and taste the enthusiasm of parties, dance in the rhythm of summer hits and get rid of your thoughts and worries.

I visited Nessebar in the end of July, however, I have been dreaming of it ever since. This pearl of Bulgarias Black Sea remains my favourite seaside resort. If you wish to find out more about Nessebar coastal resort, please, do not hesitate to take a look at Nessebar travel guide! 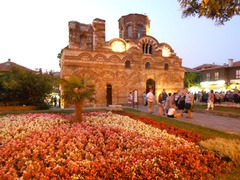 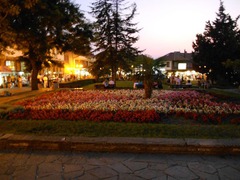 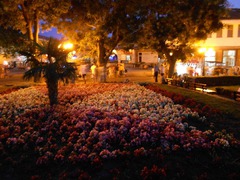 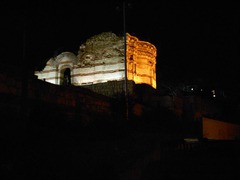 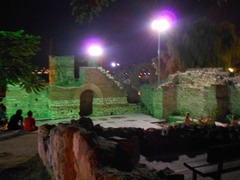 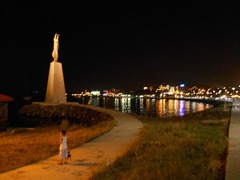 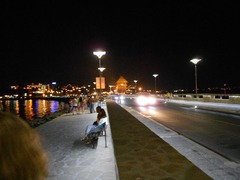 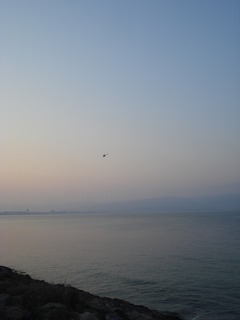