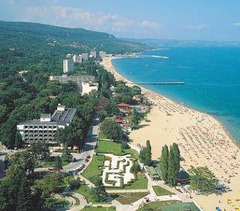 There have been a lot of Bulgarian songs and poems dedicated to the coastal city of Burgas in Southeast Bulgaria. A lot of artists have captured on a canvass boats moored on the coastlines of the towns of Pomorie, Sozopol and Nessebar, not far away from the city. We can very well say that Burgas is the southern gem of the Bulgarian coast. Its mayor Dimitar Nikolov has extended an invitation for summer 2011. Most of our efforts are to find as many points of intersection between culture and tourism as possible. Our first tourists are already here. The weather getting warmer, the active season of charter flights has set in. Since the very beginning of June, Burgas welcomes everybody who wants to take a holiday there. To our satisfaction, more and more tourists are coming every year. In summer, Burgas offers a lot of festivals. A very attractive one is the Festival of Sand Sculptures. The Spirit of Burgas Festival has already got regular fans from all over Europe. Quite recently, weve made improvements in the citys Sea Garden, and now it is even more attractive. It has got new facilities, resting places and playgrounds. The alleys overlaying has been changed, Mr Nikolov told Radio Bulgaria. Burgas is a modern seaside city, but it has got an old and rich history. There are a lot of local museums with intriguing exhibits, as well as old Renaissance-style houses in the old part of the city. A stroll through the quiet streets of Burgas can imperceptibly take one to the seashore that opens a view to the blue horizon. The surroundings of the city are also attractive to many tourists.

Here is more from Mr Nikolov on an interesting event in Sozopol:

During last year excavations archeologists uncovered what is believed to be the remains of St. John the Baptist. They are exhibited for worship in the town of Sozopol. Everyone willing to see them can do so. I am sure most of the residents of Burgas have already seen them. There are also ongoing excavations on the island of St. Ivan. The municipality of Nessebar has prepared cultural surprises for the summer season, as well. The entire region is eagerly expecting an increased interest this year Like a water wreath, three lakes spread around Burgas. These are Atanasovo Lake, as well as Vaya and Mandra Lakes. The lovers of birds can find these places perfect for a hobby holiday in Nature. Near Pomorie Lake one can visit the first Museum of Salt in Eastern Europe. Other than that, the mineral baths in Burgas are ideal for wellness and spa treatments. There are a lot of luxury places in the vicinity of Burgas. The resorts of Sunny Beach, Elenite and Duni are traditional resting shelters for Bulgarian and foreign tourists alike. One can also take a holiday in the fascinating holiday settlements and camping sites near Burgas. The entire area offers extreme water sports. Mr Nikolov talks about some of them: This year we are going to restart the sailings of a high-speed powerboat traveling to Sozopol, Burgas, Nessebar and Varna. This is a very attractive sea experience. We are also preparing for a European surfing championships that will take place in Burgas at the end of the summer season. The citys sea and yacht clubs organize small boat driving courses. Those interested can learn how to drive a boat, do kitesurfing or go windsurfing. There are scuba diving courses, too, mayor of Burgas says. According to him, in the last 3 years the hotels in Burgas have marked a twofold increase. In his words, there are more and more 3, 4 and 5-star hotels, which make possible the carrying out of bigger and popular events attracting people from Bulgaria and abroad. Germans are regular tourists in the city. More and more people are coming from Russia and the Balkans. Serbians and Macedonians are showing a growing interest in the southern coast, and so are Romanians. The summer in Burgas has already set in. The sea is expecting its friends.