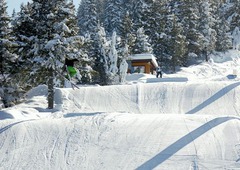 Snow Park Borosport, the newly opened terrain park in Borovets winter resort, Bulgaria, will host the first freestyle racing for the season - Borosport Big Air Open. The event will be held on 4th of February 2012. Children up to 14 years old and teenagers up to 19 years old will be allowed to take part in the competition. They will compete in two disciplines  ski and snowboard. Winners will be chosen, depending on the skills of the participants, their tricks and their ability to gain more scores. Borosport Big Air Open fully conforms with the European championships and will be the dress-rehearsal for all teams before leaving for their European tours. 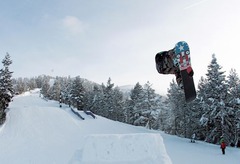 The organizers from Borosport have prepared a lot of awards for the winners, provided by the sponsors  hotel Rila, Scott, Union, Capita. Snow Park Borosport is the newly opened terrain park in Borovets. It lies in the side run of Popangelov ski run (former Yastrebets 2) in Borovets. The park is considered the most innovative and advanced freestyle (terrain) park in Bulgaria. The park is built on equipment delivered by SCHEESTERN, an internationally renowned German manufacturer. In order to meet the needs of all types of skiers, the park provides three levels of difficulty. For those freestyle enthusiasts, who are not going to participate in the racing, Snow Park Borosport has prepared the Jib and Pro line, which will be open during the whole day. Borosport and Snow Park Borosport are expecting you in Borovets on February 4th to open the freestyle racing season and to enjoy a fantastic snowy weekend. Bulgaria-hotels.com believes that its going to be a great snow party in Borovets!

Weekend of Arts and Crafts in the mountain resort Borovets

Winter resort Borovets hosts a weekend of arts and crafts from July 19th to July 21st 2013.

The winter resort Borovets has started the preparation for the summer season and the winter season will be closed with bicycle riding on May 11th.

Head to Borovets and hit the piste  photo report